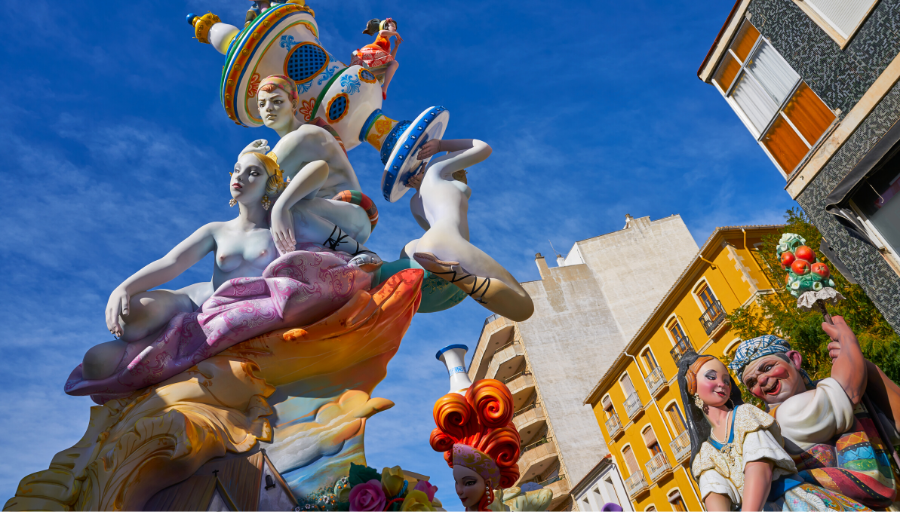 Las Fallas de Valencia are an important festival in the Valencian calendar, and are popular with both locals and tourists alike.

If you don’t know much about this exciting event, read on for everything you need to know about Las Fallas…

What is Las Fallas?

Las Fallas de Valencia is an annual celebration of the start of spring, held in Valencia from March 15th  to March 19th, and ending on the feast day of St. Joseph which is also Fathers Day in Spain. Though celebrations can start as early as the end of February.

This event is a huge tourist attraction for Valencia, bringing at least one million visitors to the city every year. In 2016 Las Fallas was added to UNESCO’s Intangible Cultural Heritage list.

The festival is celebrated with parades, parties, fireworks, live music, and traditional costumes. However, the most famous part of Las Falls is on the final night when the towering artistic monuments are set on fire in the city streets.

How did Las Fallas start?

Las Fallas de Valencia started as a Pagan equinox celebration but has changed over the centuries and now features many Catholic elements.

Local legends state that Las Fallas began when pre-Christian Iberian carpenters built wooden beams with torches that allowed them to continue with their work during the winter months when there were fewer daylight hours. As winter turned to spring, the carpenters would no longer need the torches and so would pile them up and burn them in the streets.

As time went on each carpenter would compete for the biggest bonfire, attracting large crowds. The bonfires became more and more elaborate, eventually becoming the towering monuments that are paraded through the streets during Las Fallas today and burned in honor of Saint Joseph, the patron saint of carpenters.

Who takes part in Las Fallas?

The participants are called Falleras and Falleros, members of neighbourhood groups called Fallas.

Each neighborhood falla picks one adult female, a fallera mayor, and one child, a fallera mayor infantil, to represent them. As well as having an important role in Las Fallas, these women also make public appearances and speeches at all major religious and cultural events in Valencia during the year.

The traditional hand stitched dresses and tight hairstyles worn by the Falleras are a recognisable part of Las Fallas de Valencia. These dresses can cost anything from €2,000 to more than €15,000!

The towering monuments, also called fallas, are commissioned each year by neighbourhood falla committees, taking 12 months to design and build.

Fallas are made of wooden scaffolding and then covered in cardboard, papier-mâché, and polystyrene foam which is sanded down and painted bright colors. The structures are very detailed and can be as high as 30 feet tall.

With around 400 fallas taking part each year, the fallas get more and more elaborate and usually represent people such as fairy tale characters, cartoon characters like Shrek, or celebrities like Lady Gaga.

Every falla will be burnt on the final night of Las Fallas de Valencia, but the winning falls will have a smaller version, called a ninot, placed in the Fallas Museum.

Have you ever been to Las Fallas de Valencia?